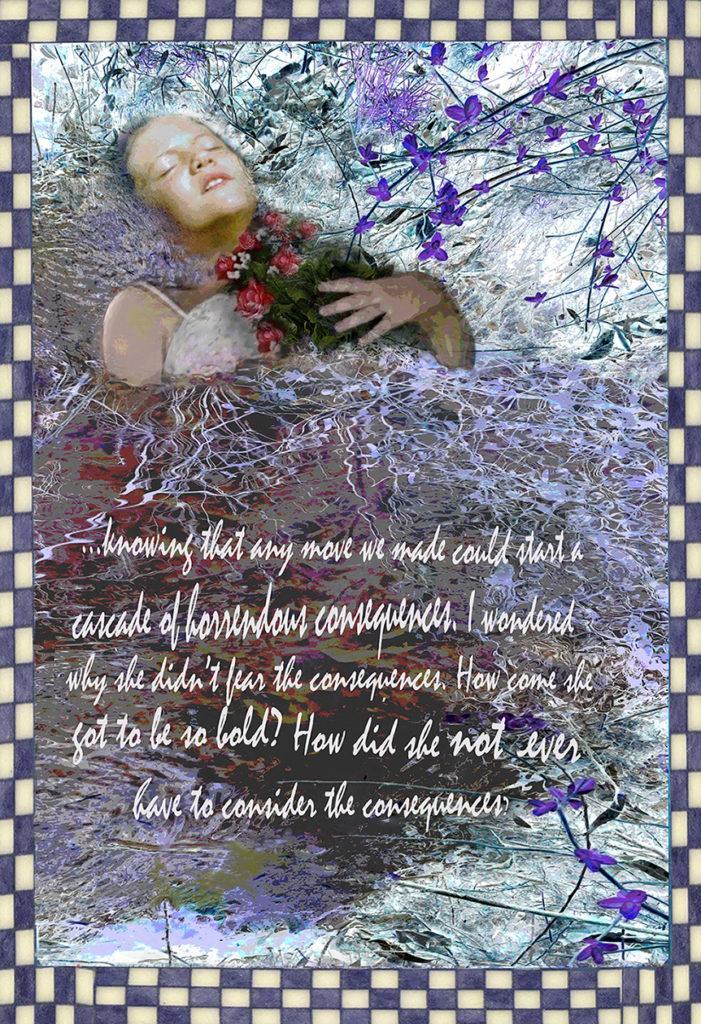 Only three weeks into cancer, Marika was on life number three. The Roc Docs noted in her charts, “Reactions to treatments—fast and horrendous.” Reluctant to leave her side, I became a slow-moving aerial drone, on top of her constantly, watching and waiting.

“Mom, I can’t see,” she hissed, days after her seizures, when I turned on the television. “Why can’t I see right?” She punched the nurse-call button and tried to yell. It came out as a hoarse whisper. “I’ve lost—everything,” she tried to tell me. Life as she knew it was indeed lost. Her voice was gone. She was losing her hair. Soccer and singing were out. And now almost all the vision in her right eye, and some in her left, was gone. She knew, with impaired vision on top of seizures, it would be a long time before she could drive again. Driving was her independence, her freedom. I was watching a trapped animal, and there was nothing I could do. Stunned by her fury, I shrunk into a corner while she screamed. At the doctors. At nurses and aides.

She demanded to go home, but she’d developed a fever and a mysterious pain in her right shoulder. After tests and more drugs, the Roc Docs decided she had a swollen pancreas. Then the pain suddenly subsided and we were sprung from Strong.
“No raw fruits or vegetables,” the Roc Docs reminded us as I packed the stuffed animals, candy-grams, and other accumulated gifts into pink plastic hospital bins.
“Well, I’m having sushi for dinner,” she stated.
“No sushi. Nothing raw. No flowers, no dirt. No germs. No friends with colds.”

With a long list of instructions, fifteen different prescriptions, and orders to take her temperature several times a day, we left Strong. It was scarier than the time I brought home my firstborn. So as soon as we reached Ithaca, I invited our mother-daughter group to the house.

The living room was packed when Marika asked, “Mom, do you have scissors?” Then she sat with a towel at the dining room table, and her friends cut off her ponytail and shaved her head. Music played and everyone cheered. We ate her favorite cooked foods, grilled steak and Wegmans boxed macaroni. And later, as she and I counted pills out into plastic boxes, I couldn’t stop wondering how this daughter of mine could be so brave. And beautiful, even without hair.

For two nights Marika and I slept gratefully in our own beds. Then a fast-rising fever sent us racing to our local hospital. Marika was sent back to Rochester in an ambulance with her father while I followed behind in my car. But I couldn’t keep up. Shortly into the trip, my heart sank as I watched the speeding ambulance disappear ahead of me.

She arrived in Rochester in septic shock, with breathing difficulties and very low blood pressure. She actually asked to be intubated and put on the breathing machine again. So by the time I parked my car and caught up, Marika was back in the ICU. The shoulder pain thought to be pancreatitus turned out to be pneumonia in both lungs, and a virus had invaded her heart muscle. For two days the ventilator was set to maximum levels. She was given end-of-the-line, last-rites crisis drugs to keep her blood pressure from falling through the floor. I stared at her, hugging my sides to hold myself together. Except for her shaved head she resembled Ophelia in the John Everett Millais painting. Ophelia lying still, and singing. In a river. While drowning.

In a few days, still on the ventilator, Marika was awake with a pitiful look on her face. She patted her stomach whenever anyone entered the room. “Hungry,” she spelled out on an alphabet board, unable to speak through her breathing tube. Half dazed, still under sedation, she could hardly communicate. Giddy to see her finally awake, I couldn’t think straight.
“They can’t feed you anything; you’re still on the respirator. That’s dinner,” I said, pointing to the bags of IV nutrition slowly emptying into her system. The nurses were nervous because she was supposed to be sedated, and instead she was getting more and more agitated. Marika glowered at me like I should do something. She grabbed a marker, and drew a long urgent scrawl on the backside of the alphabet board, and glared at me with desperate eyes. I had a sinking feeling I knew what she wanted, but didn’t want to mention it in case she’d forgotten.

A month ago, she’d written on her blogsite, “as for my graduation…we don’t know what kind of condition i’ll be in on june 26th. and prom… i’m still deciding whether or not to go. i’ve got a date, a dress and will have tickets, but I won’t have hair. ick…” It was clear to everyone but Marika, she would not get out in time for her senior prom. We were still hanging onto a tiny particle of hope she would be able to attend her graduation in another week. I was crushed because I couldn’t make it all better and I wanted so much for something to go right for her. It’s not fair. That’s what she used to say when things didn’t go her way. Since toddlerhood she’d been a strong proponent for her rights. “Not fair, not fair,” she would chant almost daily. But now she had lost her voice. So it was up to me to sing it. Only now, I, too, was mute.

The oxygen levels on the ventilator were turned down as Marika’s lungs dried out. Finally they took her off. Red, and blimped-out from all the IV fluids and steroids, she resembled the Michelin Tire Man. There were tape marks on her cheeks. Strung all over with tubes and cords, she was decked out like a Christmas tree when Marcus, her baby-faced boyfriend, arrived for a visit.
“She looks like she’s gone through the heavy wash and extra spin cycles in a commercial washer,” I warned Marcus.
He asked, “What do I say to her?”
“It doesn’t matter what you say,” I told him. “It’s all in your eyes. Just look at her like she’s the most beautiful thing you’ve ever seen.” Why was he asking me this? I’d run out of words weeks ago, when cancer first hit. We entered the room and he smiled adoringly at her. I almost melted at his smile, myself. And as I tiptoed out, I heard him hesitate and gulp,
“Uh, boy Marika, you sure have a lot of wires coming out of you.”

Days later, on the evening of her senior prom, Marcus came back. The nurses had decorated the room. White balloons and crepe paper. Music played from an old boom-box. They’d dressed Marika and propped her up in bed so that the lacy white prom dress hid the wires and dangling tubes. They topped her off with the red wig my mother had bought. And on the bedside table, set festively on doilies, were two containers of red Jello, the only thing I found in the cafeteria she could swallow without gagging. There was a great stirring in the hallway when Marcus walked in. Almost seven feet tall, handsome in his tux, he carried a bouquet of red silk roses. I scurried from the room. In tears. In grateful peace.

In the hospital there really was something peaceful. For me. For the first time in years Marika wasn’t fighting me. She focused on her disease and the medical staff. I was not the enemy. We even collaborated sometimes, us against them. Like the time we ‘accidentally’ unplugged the monitor when no one responded to the call button. Mostly though, I hung back and didn’t interfere, knowing the side effects of our actions could be horrendous. Knowing that any move we made could start a cascade of consequences. And I wondered how come Marika got to be so bold? How did she not have to consider the consequences?

“I’m going to my graduation,” she announced, to me, and her doctors, two days before the event.