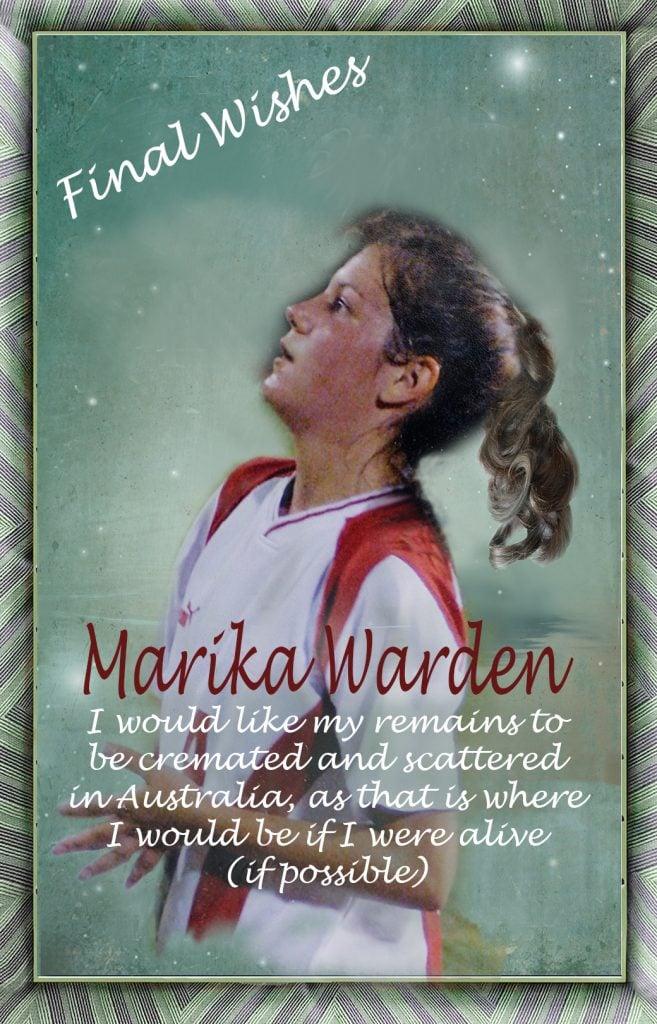 I’m an intruder. Stalking through my daughter’s sacred and secret things. No mother should ever have to do this. It’s all upside down, inside-out. Backwards. Yet I feel my dead daughter is watching and directing my every move.

Marika hadn’t even died yet when her father began to whisper about what we should do with her remains. Scrunched together with his wife and our son Greg in a curtained-off alcove fifteen feet from Marika’s ICU bed, he said he wanted her to be buried in a cemetery near his house.

“So I can visit her.” His eyes winced wildly. I tried to contain the scowl twisting my face.

“Marika would want to be cremated and have her ashes scattered in Australia,” I said, the words flying out of my mouth even though Marika and I had never discussed this. I caught up my drooping jaw and gulped. And realized it was the first time in years I was sure of anything about her.

I was right. Days later when Marika died, Rachel, her closest friend, found her final wishes. In a shoebox under the bed, in the apartment she rented with friends, where she’d moved half her stuff, and stayed when she wasn’t sick puking or in pain.
“You should write some final wishes. Just in case,” I’d told my daughter, four months earlier, back when writing wishes was more like making a shopping list. She’d actually done something I’d asked. Now I ache to think of her sitting alone in that place, imagining herself no longer alive when these words would be found.

“In the Event of my Death,” Marika had written by hand in November 2010. The document is simple and short, like her life. “Final Wishes” is penciled in diagonally at the top, the two words flying heavenward off the page. “If I am ever in a permanent vegetative state, do not keep me alive on life support.” Then she bequeaths her personal things. First, I would get Suki, her dog. Her closest girlfriends would get “whatever clothing they desire.” She shopped for her clothes at the Salvation Army and other secondhand stores. Who would want her clothes? But I want her fake leather cowboy boots and the sweaters she never returned that I lent her, and she lent to Taylor or whomever. Her jewelry is to be divided among the girlfriends. Figuring money was what her brother would value the most of all her earthly possessions, she requested her college fund go to Greg, “If possible, … along with the bracelet he gave me from Iraq. I wore it almost every day.” To Russ, her music partner, she leaves her guitar and lyrics. Other friends, the guys, get the pipes and party paraphernalia she’d given pet names to, Cricket and Halo. And on the bottom of the second page, she had signed her name with a final request. “Marika Warden. I would like my remains to be cremated and scattered in Australia, as that is where I would be if I were alive (If possible).”

Wishes. Last wishes. Wishes on stars. Birthday wishes. I was with her on every one of her birthdays. Twenty birthday cakes. With candles. Always one extra for good luck. Her last wish—leaving her ashes in Australia, where she had intended to begin a new life, free of cancer, and me—she must have known I’d make it possible. Anything would be possible. For her.

Her father hadn’t been mentioned in the wishes. Through the black hole of the past week, he had needed to grab onto every last little thing that had been Marika’s. He can have it all, I tell myself, the next four days as I poke through her soccer trophies, beanie babies, CDs…. Then, on the fifth day, my house fills up with people. Time to go to Bangs Funeral Home.

Marika orders me to bring her stuffed Puppy, some photos, and the first journal I discovered with the one poem. Looking for a bag to carry these to Bangs, I scrounge through a closet until a perfect-sized black canvas tote surfaces. It seems to be empty as I begin to load my few items. Then I notice a small plastic bag in the bottom. I take it out and unwrap the paper towels inside. Suddenly I’m holding Marika’s ponytail. Almost dropping it, I gasp at the silky-soft honey-brown bundle still bound at one end with a rubber band. Three years ago, when it became apparent she was losing her hair with the start-up of chemo, Marika’s friends had chopped it off and shaved her head. Not quite the requisite ten inches needed to donate to Locks of Love, a nonprofit organization that makes wigs for children suffering hair loss from illness, the ponytail had been stashed away.

I hold her hair to my nose and sniff, then slip it back into the bag, and hurry off to the funeral home where I give it to her father.
“So you can visit her anytime you want,” I tell him.