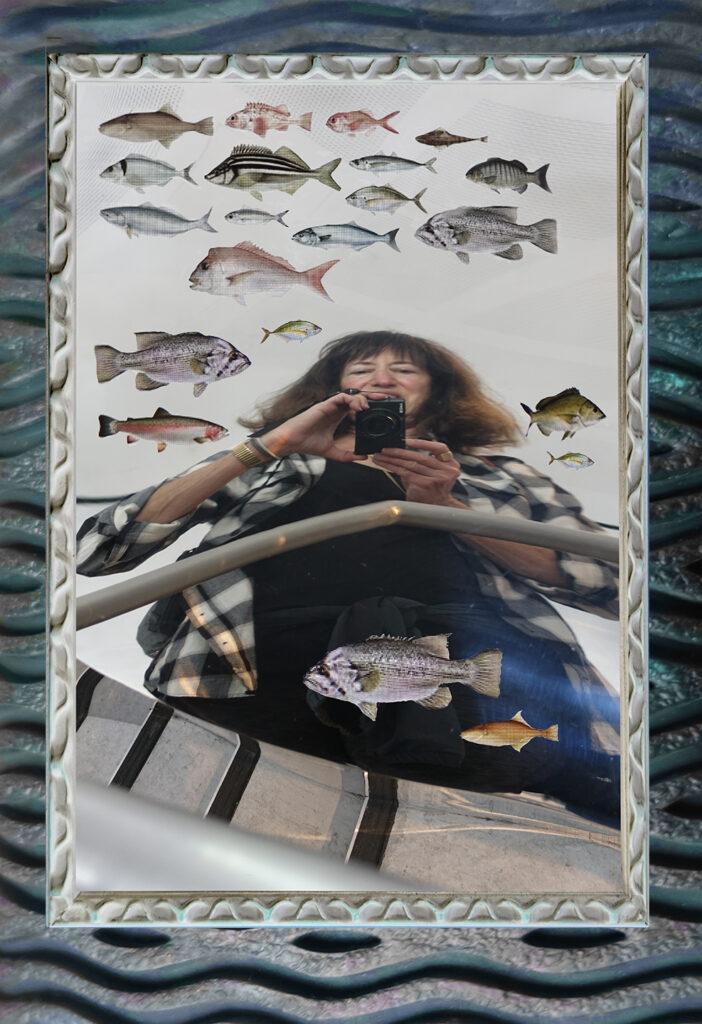 Marika’s Australian scrapbook is filled with names and words. Excited scrawls strewn over the pages: “Suki wishing well” and “Wishing Tree.” “Flying foxes.” “Floating stage.” It becomes a game, a scavenger hunt. Her words are clues that set me loose fishing for what she saw. I canvass my way all over Sydney, and question people in the streets to find what Marika found.

Which of the countless statues of dogs was a wishing well that reminded her of Suki? She wrote “Hot Sake,” so I feast in Asian eateries, imagining her delight at being able to drink legally in Australia. She wrote “seagull and Big Mac.” Could she have seen the same seagulls and egret punching around the MacDonald’s bag that only the long-beaked egret could successfully reach into? “Weddings!” she’d written, and I could feel her joy. Words are no longer just words. They are stories. ‘Weddings!’ is a story. ‘Wishing’ is a story. And the word ‘ashes’ is now my tour guide who tells me, “Mom, you hafta go to the Queen Victoria Building,” and “Go to Darling Harbour.”

I pounce on this city like a young child attacking a pile of presents. At Taronga Zoo I follow koalas, quokkas, and rabbit-eared bandicoots. At the Aquarium, I stand in awe, surrounded up and down and on all sides by fish that swim serenely to classical music. Hanging out near the University of Technology, I find exotic Chinese Gardens and flocks of colorful parrots. I follow my nose through aromatic Asian and Italian neighborhoods, and pick out a live barramundi fish to feast on in Chinatown. I scarf down fish fries on the wharf and stuff myself with mashed pea-and-meat pies at the Harry’s Café de Wheels truck. Hot on Marika’s trail, I eat ice cream and crepes for breakfast at Pancakes on the Rocks.

The streets are lit up when I go to see The Marriage of Figarro at the famous Sydney Opera House. A huge chandelier is suspended over a floating stage on Sydney Harbour for the next evening’s performance of La Traviata. Loud funky music blasts out of shops along Elizabeth Street where everything is young and full of life and light, all day and long into the night. For four full days I ride the buses and walk endlessly in and out of markets, shops, museums and parks. I hop on a ferry and toss Marika’s jewels into the water at Darling Harbour and off the Harbour Bridge. Dropping her bracelets into deep water, it feels like I’m planting her here.

On the evening of my last day in Sydney, I am on a ferry I took out of the harbor in order to get free Internet access. I need to be in touch with my support squad. It is time to leave Sydney, the easy part of my trip, the first part of my four-part journey, where I’ve gotten comfortable and now feel safe. I send out a message to my friends: I’m emailing you from the middle of Sydney Harbour! We just passed the Opera House. Looks like we’re headed for the Pacific now … connection could quit any time … hope this ferry returns to the wharf eventually… more to follow.

I’m kicking myself for assuming the boat would return to the same place. Like home, I don’t expect I can really get back, not like the way it was. And what can one assume in a place where you don’t dare drive because people drive on the left and pass on the right? As it turns out, I can’t even walk properly in Australia. For four days I’d bumped into people and done a do-si-do dance with them in the street trying to figure out who was supposed to move over, and where, to let the other pass. Until some BIG guy coming from the opposite direction grumbled in his adorable Australian accent, “Yer in ‘Stralia now, yer not in America, darlin’. Stay lift!” I got it. Just in time to leave the crowded streets of Sydney, the city that whispers to me, “It’s okay, your story’s no sadder than anybody else’s here.”

And in Sydney Airport once more, headed for Melbourne, I’m coddled as if there’s a sign on my front saying ‘delicate.’ I’m told I don’t have to take my box of ashes out for inspection. I don’t have to remove my shoes. And in a state of disbelief, I completely forget to take out my plastic-ziplock bag of liquids. So forgiving is Sydney. She purrs, “We’ve seen it all before.” And at the airline counter, the agent offers, “Since you’re here two hours early for your flight, we can send you on the earlier flight, no extra charge.”

‘Sydneysiders’ they call themselves proudly. What a warm, sweet beginning to my journey. Doing Sydney first was like starting a meal with dessert.