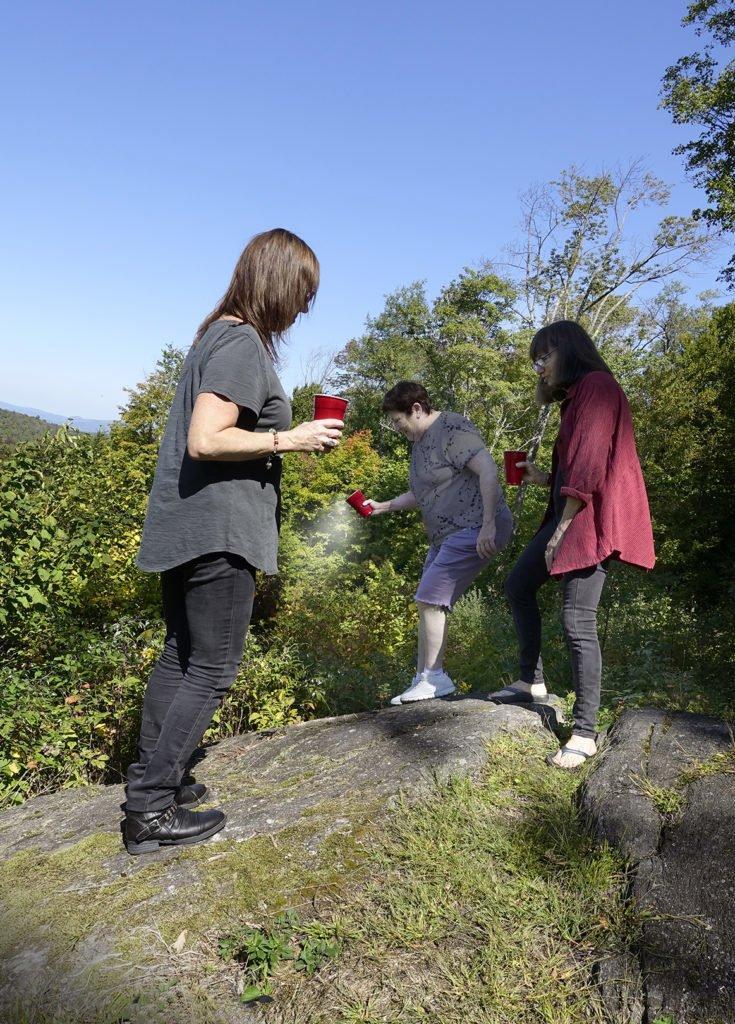 My mother’s ashes filled three red plastic 18-ounce cups. One sister poured the cremains evenly, and almost to the brims, and handed the cups to the others like she was serving Juicy-Juice. We sisters stared down into the ashes. They were much finer than my daughter’s had been. No coarse sand or bone fragments. These ashes were fine enough to fly. Which is what Mom had wanted: Take me to October Mountain and scatter my ashes to the winds, that I may soar the Universe and observe eternity, she’d written. The powdery ashes would fly, but they’d stick to our hands. Good thing one of us had thought to bring cups.

There we were. Four of us, aged-sixtyish women with an impressive collection of phobias and health issues, gathered at the overlook of October Mountain. We’d traveled from as far away as Florida to be where Mom had spent over twenty summers. The drive up mostly unpaved mountain roads had been brutal, the Toyota Highlander plunging up and down, in and out of huge potholes. Finally reaching the lookout point, we’d tiptoed out of the Highlander trying to be inconspicuous, and hobbled over to the highest point, a large rock littered with cigarette butts.

The fourth sister, our honorary sister, refused to be dragged up the rock. Instead, she would snap photos from below. Close by, in the parking lot, a man sat on the tailgate of his truck, smoking, and watching the view with his pit-bull who eyed us with interest. We hesitated, hoping the man would leave. But he started up a new cigarette. And then a park ranger who was spraying something nasty nearby came over to warn us not to go walking into the brush below. As if there was any possibility we ailing-ancients might venture off our rock to go bushwhacking down the mountain.

We better do this fast, one sister said, when the ranger turned back to his exterminating. None of us wanted to be yelled at, or maybe even arrested, for sprinkling ashes in a state park.

The day was sunny and clear. Fall colors were just beginning to paint the hills. From our perch on the overlook we could see all the way to Mount Greylock—But there was no wind. It took only seconds to toss out three streams of my mother’s ashes. They landed inches off the rock, thickly dusting the bushes below us in white.

No words were said. No poems. Quickly we gathered up the cups and bags, and scrambled into the car, and headed back down the mountain on the bumpy dirt road. Without being stopped. And two days later I’m sitting in my cozy house wondering if the winds ever picked up enough to send my mother’s ashes soaring—to greet the Universe—before the rains came down.

What is your Ashes Story?