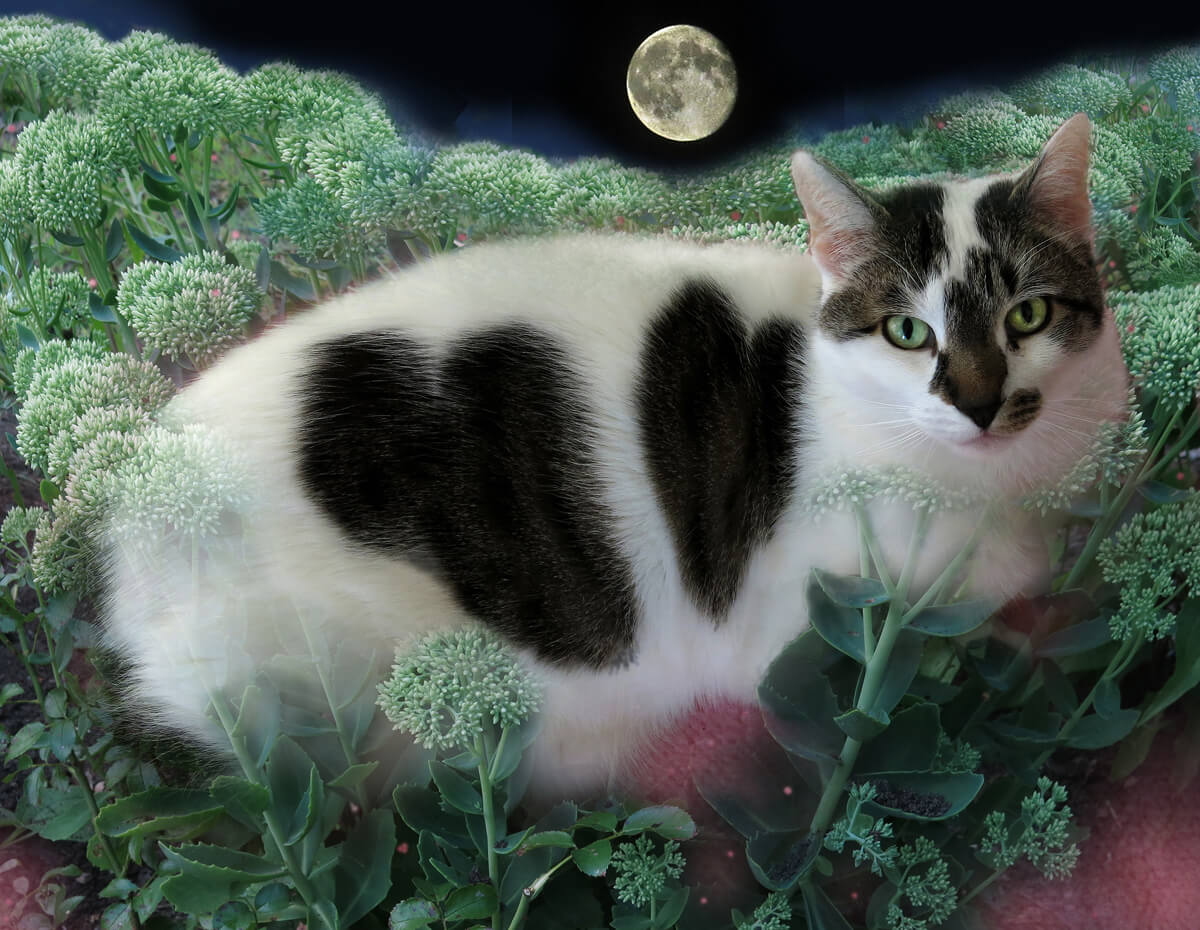 Going to bed is not possible. Because before I go to bed I brush the cat and give him the last half of his chow so he won’t stomp on me, hungry in the middle of the night. But there is no cat tonight. I have killed him.

He’d just finished his dinner and was making the yowling sound that usually means he’s about to throw up. I chased him yelling “No Not On The Carpet” all over the house until the dog and I cornered him. He was panting and a front paw looked broken. He tried to get away limping on the buckled paw. That’s when I realized he was in pain.

A bright almost-full moon glared at me as I lugged the cat carrier to the car. The cat and I drove from one emergency animal hospital to another but Cornell University’s Companion Animal Emergency and Critical Care Service confirmed what the first vet told us.
“We can stabilize him $800 to $1000 overnight $129 to have him seen by the vet, call the cardiologist in the morning maybe $1600 heart failure leaking blood clots $340 sonograms and testing, hypothermia, hypertrophic cardiomyopathy – we cannot promise a good prognosis …” I’d already spent $100 at the first hospital.
“Please. I don’t want him to be in pain.”
“It’s up to you,” said the vet.
“Look, I’m the one who signed the papers to remove my daughter’s life support. So I can face letting go of her cat if it’s the time for that,” I told the doctor of veterinary medicine who looked no older than my daughter who died.

Almost ten years ago, at an SPCA extension in PetSmart, Marika held up a lethargic kitten that had multiple thumbs and a Roman nose.
“Look mom. This one has two hearts on his side.” With some effort, the kitten raised its head and licked her hand gratefully. “You’re lucky,” she said. He was lucky. The vet found eye and ear infections, an upper respiratory infection, and a heart murmur. We took him home. Marika named him Skittles and he grew to be a big, sweet, healthy member of our tiny family. Now Skittles’ luck was running out. His heart murmur had caught up with him.

This is crap, I said to myself. I am not God. Why am I always the one signing papers and calling the end to life?

Skittles was wailing when the vet carried him back to me, swaddled in stiff pink waterproof pads. I wrapped my arms around the pitiful bundle.
“I’m sorry,” I whispered into the fur on the top of his head. “Thank you for being a really great cat.” What could I say to this friend I just sentenced to death? “I love you, Skittles.” I rubbed his chin. He licked my hand gratefully as the vet injected him.

The almost-full moon glowered at me when I arrived home and walked my daughter’s dog in the driveway. It kaleidoscoped through my tears as I began my nightly chant:
“Goodnight Moon. Goodnight Marika. Goodnight Morocca, Fraidy, and Sushi … Goodnight Skittles.”

Has anyone ever had to do this? What do you do to feel better? It feels like I’ve been dumped into an old plastic bag where something’s decaying. Everything looks blurred and gray outside the bag while inside it stinks and I’m running out of air.