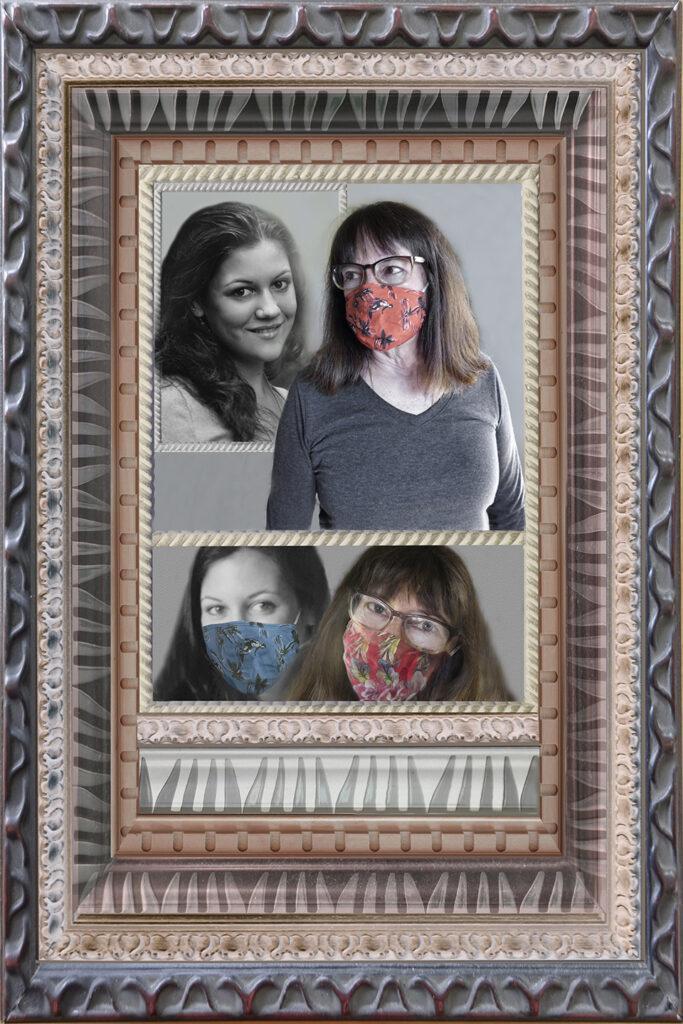 On the tenth anniversary of Marika’s death, in the spring of 2021, I am once more about to re-enter a changed world. Gently, my dead daughter drags me from the table where I’ve been blogging and Photo-shopping for almost a decade. It awes me to consider Marika’s been dead for ten years. Dead but not completely gone, some remnant of her now coaxes me from the house and down the long rocky driveway to where it meets the highway.

At the beginning of 2020, I had wanted to be out with people more, to spend less time and energy writing. So, instead of having to come up with new material each week for my blog, I started sharing the manuscript I’d already written about our journey through the wilds of cancer. Over the course of the year I broke up the 200-page/21-chapter memoir into weekly blogs and Photo-shopped illustrations for each, “Just to keep in touch [with my readers] while I venture out to discover where life will lead me next,” I wrote in the first entry. Then, shortly after I began, the world broke out into the COVID-19 Pandemic. Life, as I knew it, ended once again. And I was stuck social-distancing at home, alone with Marika’s ghost, her dog Suki, my computer, and my manuscript. Reflecting on this difficult past year, I believe that what kept me going was the rewriting, illustrating, and sharing of our stories, with Suki and the sweet ghost of my daughter by my side.

This COVID thing. It takes me back to the days of cancer and caregiving, when Marika and I wore masks and avoided crowds, always fretting about germs. That was when I first learned to sing the birthday song twice-over while scrubbing my hands. I would scrutinize everyone we came into contact with for any signs of infection or possible contamination. Living with cancer was so lonely back then. If only we’d had Zoom. Marika would have been endlessly zooming parties from her hospital bed. Maybe I could have zoomed my son and Laurie instead of burying my head in novels so much of that time.

Because of the novel coronavirus, I haven’t seen Greg in well over a year. He texts and phones me regularly from California where he works in executive security. I am so proud of him, employed and keeping up his own apartment during these chaotic times when so many sons and daughters are struggling. “There’s always a place for you here,” I tell him, in case things change.

Laurie phones me. And sends gifts through the mail. She still practices medicine but works online at her home these days. I miss her and look forward to the day my sisters and I can all get together again in person.

And Rachel. I mean Ray. On the eve of the tenth anniversary, Ray texts me from his cozy home in Florida, “Sushi tonight,” and I text him back, “Sushi tonight and tomorrow. Wish it could be with you.” Ray is a very handsome man now. He’s worked hard to find himself and make a good alcohol-free life. Yet he readily talks about his beginnings. And when I mention the dream I recently had where he was still Rachel, he told me he sometimes dreams of himself in his old life as Rachel, as well.

My friend Liz is my COVID buddy. Throughout the pandemic we have shared meals in each other’s houses and formed a tiny safe pod to get through this time. On the morning of the tenth anniversary, we mask up and meet at Ithaca’s new Trader Joe’s where she tells me first thing, “You have to buy flowers for Marika.” Then I shop like in the old times, bringing home more than I can possibly stuff into the freezer.

Suki, my inherited dog, is eleven years old now. My constant companion during the pandemic, she’s still hiking with me several times a week in the remote hills around Ithaca. It’s eerie how Suki often stares intently out across the living room, tentatively wagging her tail as if she maybe sees the shadow of someone she once knew and loved. If Marika were to actually appear, that dog would go ballistic jumping and a-leaping, dog-kissing her and squealing in joy.

As for me, I try to be One Tough Cookie, an expression of my mom’s I adopted after she died two years ago. I don’t want people to look at me and see only the pathetic Mother Whose Daughter Died. Okay, I do now-and-then nosedive into my grief, needing to wallow in the pain. And sometimes a song or smell will trigger me into a meltdown. But most days I’m filled with gratitude. Even during these COVID times, the life I lead is one I love, is one Marika would be proud of, is one she would have loved to live herself. I am the Mother Who Swallowed Her Daughter. There’s something of her in me now that soars at each opportunity for adventure, that sings in the car on the way to and from home. I now view the world through two sets of eyes, Marika’s and mine. And I carry her with me in joy as much as in sadness.

I’m still on the fence about religion and heaven. And angels. And where one ends up after dying. My best friend from childhood, who discovered God and became an ordained minister over the decades I lost touch with her, told me God is everything, is in everything. That works for me. To me that means God is in Marika. And that makes me less embarrassed about admitting that these days I pray mostly to Marika. That’s not meant to sound irreverent. But maybe if we all connected the people around us to God in that way, we’d end up treating each other a lot better.

It took me four years to even consider joining a grief support group. One day I became a volunteer making bereavement phone calls for Ithaca’s Hospicare and Palliative Care Services, and shortly after, I began attending a child loss support group through Hospicare. That group eventually became the Ithaca Chapter of The Compassionate Friends. TCF is a peer support community for families that have experienced the death of a child, at any age, from any cause. Through TCF, we see the many different ways to live—with and without—our children who died. A dedicated member, when I realized there were other bereaved parents having problems socializing, I organized an offshoot of our local group to gather over monthly potluck dinners at members’ homes. All these get-togethers have had to operate via Zoom during COVID. And that is how I ended Marika’s tenth anniversary day, zooming with good friends who “get me.”

In November 2017 I returned to Australia. Traveling solo again for that trip, I met up in Adelaide, Melbourne, and Sydney with other bereaved mothers I’d found and friended on Facebook. Bonds formed easily with these strangers on the other side of the planet as we shared our stories and photos. And in Sydney, after giving me a tour of the city and the university Marika was to attend, TCF New South Wales president Jenny Wandl brought me to a monthly TCF meeting before taking me to her home to cremate Marika’s stuffed Puppy in her outdoor grill. It turns out Puppy was made of polyester, not cotton. So her remains were hard black chunks rather than ashes. Which reminded me that we’re all made of tougher stuff than we think. With Jenny’s help I scattered what was left of Puppy in the rocky shallows of Sydney’s Manley Beach. Being non-biodegradable, perhaps Puppy’s remains are still floating there among the rocks.

In the winter of 2021, I got the two COVID-19 vaccinations, each time holding tight to the memory of Marika grabbing my hand whenever she got a blood draw or injection. Sometime after my second shot, I woke up early one morning having dreamed of her. But it wasn’t the dream that woke me. I heard her say, “Mom,” her voice, spoken distinctly, close to my ear as if she was standing right over me. Just the one word, “Mom.” It was almost physical, like I could feel the breath in it. In over ten years I had not heard her voice so loud or clearly. And Marika’s voice didn’t fade like most dreams fade. It kept me smiling for weeks. I can feel it still.

I don’t know what’s next for me. It’s been cozy and safe, staying close to home. But almost daily, something of Marika drags me out into the world. On the news now they’re saying vaccinated persons no longer need to wear masks. I’m still wearing mine around my neck and keep an extra in my purse, but the Marika in me is already tearing it off and applying Very Berry Lip Gloss. She tells me, “Mom, I want to eat INSIDE a restaurant,” and has me checking out menus online. With her encouragement, every day I inch out a bit further from the house in one direction or the other. No longer rolling her eyes at me, in gentle prodding she says, “Mom, get a life. It’s time.”